Few in life get to answer their calling, find their life’s purpose. Most enter adulthood and have yet to figure out why they were put on this earth.

For DJ KittKatt, a kid from Compton, it became abundantly clear on what he was to do with his time on earth, become that badass DJ on the ones and twos getting the crowd going and heads banging.

We recently sat down with DJ KittKatt and asked him about his new show, “Taking Ya Back Tuesdays” on KJAMS with DJ Miles, and about his story coming up, getting his shot and where his passion for DJing came from. 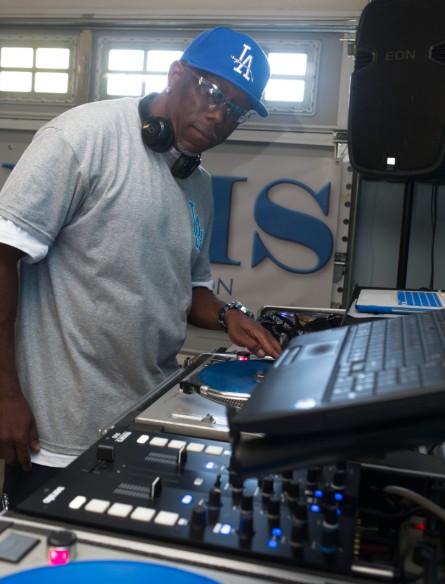 DJ KittKatt: “Music was a way of life. We got into the music. Me, (Ice)Cube and WC grew up in the same neighborhood and we would hang out and they would rap and we did our thing.”

DJ KittKatt: “Growing up, my mom and family would always spin records at the house. All the oldies and dance music. Then when I got older I would go to the clubs and house parties and also find my way to the music. It never dawned on me to ask where the music was coming from.

One random night, I asked where the music was coming from. I thought it was someone just playing there big ass box but then I saw this guy on stage. This guy was going back and forth doing his thing. I find my way up there and he was behind two turntables doing his thing.

The way I saw him manipulating the crowd, then stop the music then start it and then make a beat with his hands and control the whole crowd with just records, I told myself Moms has a bunch of these records at home.

He called me on stage and I thought he was about to kick me off or something but he said ‘watch this’, then he goes and plays the record backwards, it was Atomic Dog, and the crowd was still dancing, I said yup there it is, this is better than baseball and that was when I knew.

I had a baseball scholarship to Texas A&M but when that music kicked in, baseball took a seat.

KJAMS: What was your first mixes like and how’d you get your start

DJ KittKatt: “I actually started before I knew what turntables were or that’s what these DJs were using. I would use my cassette recorder and listen to KDAY and create my own mixes, bouncing one tape to the next.

I would listen and catch a certain song and then i would have to wait until it came on again to catch it at a certain spot again to finish it. It would take me four days to finish one song.

Once I got my hands on some turntables I just stayed on them for months. Listening to the radio and just mimicking what we got until I got it down.

KJAMS: What was your big break and start getting recognized for your talent?

DJ KittKatt: “After I got my turntables and creating mixes of my own people started to talk about my skills and wanting to hear more. Then after a minute, people started to come up to me and ask if i ever heard of Uncle Jamms Army, i’m like yeah, they one of the badass m***** f****** groups out there.

They told me that they were looking for a new DJ and having a contest and that I should enter and I would for sure win.

So I packed up my gear and got on the bus and we end up getting off at the wrong damn stop.We knew that we weren’t going to catch another bus anytime soon but my homie pulled out a flyer for another spot called The Cave and some guy named Arabian Prince will be there and he is having a contest too.

Won that. And then my career jumped and the rest was history.

DJ KittKatt: “It’s stronger than ever. With the technology today and being able to carry all your records in one laptop makes room for more creativity.

These young DJs wouldn’t be able to hang with the old school Djs. We had to say for 6 months, you have to take these three crates of records, these big ass speakers, make sure everything is hooked up and sounding right and do three gigs a week, they’d quit.

I’m not saying they are not talented, but most are having a hard time coming up with mixes when they have all this technology they can use.

As an old school DJ I love having all this technology, it makes it all just way easier and makes everything better, faster, smoother.

DJ KittKatt: : “I love it, I have been hearing about KJAMS from DJ Gemini, and once I checked it out, DJ Miles said let’s do something and I was with it.

We about to take this show and put it to the top. Most radio stations play the same couple of songs. You can listen for twenty minutes and a song will repeat itself.

You tune into us, every Tuesday for two hours and you are going to hear different sets with different styles. Me and Miles bring you two different flavors.

It doesn’t matter what you like. If you like house, techno, old school or something else, one of us is going to mix that in.