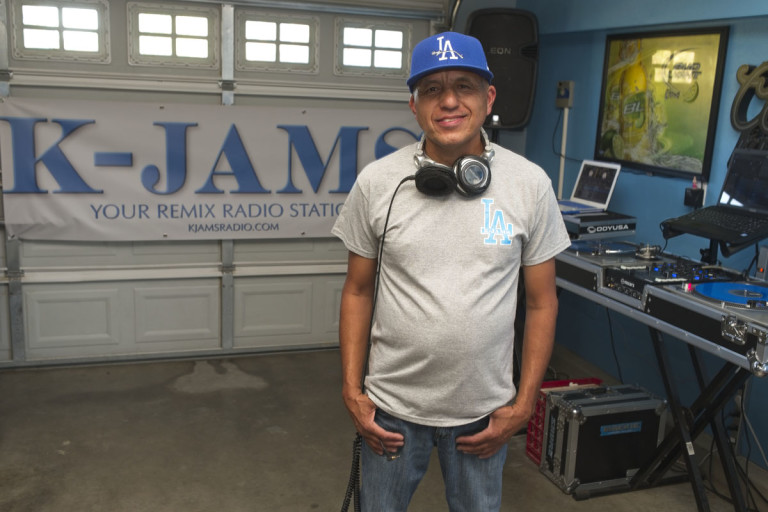 Growing up in Southern California, Sun Valley to be more precise, there was no way DJ Miles would do anything other than be involved with music in some way or another. An appreciation for music quickly grew at a young age for DJ Miles as his family were all musicians and he would be immersed in everything music.

“It came easy to me and my love and appreciation for all kinds of music started when I was young, it came from the roots,” DJ Miles said. “Being around live bands and now DJing for years, I figured that it is the same thing. In order to be great at either one, you have to have your timing down. If you don’t have timing it ain’t going to work out.”

We recently sat down with DJ Miles and asked him about his new show, “Taking Ya Back Tuesdays” on KJAMS with DJ KittKatt, and about his story coming up and where his drive and passion for DJing came from.

DJ Miles: “When I was young it was right in the middle of the break dancing and pop locking era. That was the hype thing to do for us kids. We would listen to KDAY on the radio and on Fridays they had the KDAY Mix Masters show, they would mix and scratch. I had to learn that, it was something I had to do.”

DJ Miles: We would listen to that show in my dad’s garage and we would break dance, and all that listening to the Mix Masters is where I became a fan of mixing and when I was 15 I knew that is what I wanted to do.

Everyone wanted to become a DJ but I took it seriously, but it wasn’t easy at first. There were a lot of Haters out there. No one wanted to let me touch their piece gear.

Even some of the neighborhood homies didn’t really let me get down on their turntables, so I said OK, OK, Alright THEN.

So I was able to get my own mixer, I rocked with a Realistic Mixer and two different turntables. I didn’t have what other kids had at that time, the fancy gear and all that but I made it work and practiced on my turntables nonstop.

KJAMS: When did you start getting recognized for your talent?

DJ Miles: So when I kept practicing I had this mentality that I’m coming after all those haters and other Djs and i’m going to be the best, that I am going to be better than you, and the next guy after.

I had the mentality that I was the best but I didn’t go around saying it or anything like that. It was just my thought process and it helped me get down.

I remember one time a guy from the neighborhood came to my house and got in my face and started hating, saying that im trash and this and that, but I knew I was better and to this day I am still good friends with him.

I’m still the same humble guy and didn’t let that get to my head, especially myself thinking that im the best. That was just my mentality and it was people that were saying i was the best and all that.

DJ Miles: It’s not on a decline, there is a demand for djs everywhere. The only bad thing that is going down right now is that with the technology now, there are a lot of guys who have a laptop with songs on it and think to themselves, “Oh I’m a Dj,” but it doesn’t work that way.

A lot of guys today think they can go get a laptop and load it up with music and download a certain software and call themselves a Dj, but the problem with that is that they are ruining it for the REAL Djs that are out here doing it and trying to make something out of it.

The big difference between old school and new school DJs is that the old School DJs had to learn by ear. We had to have an ear for the beat and when to manipulate the turntable to match BPMs by ear. The new school uses and learns technology and makes music that way. I’m not hating, I’m just saying that is the difference.

At the end of the day, if you have talent, it doesn’t matter what you use, as long as it’s good then you will be alright.

KJAMS: What goes into creating a new mix or do you do it on the fly.

DJ Miles: On last night’s radio show, I had a vision in my mind of the genre I was going to do, the BPM I was going after but when it was my time to play i played something totally different. I am the type of Dj that doesn’t program sets, I do everything on the fly basically.

I can just jump on and go, and thats what makes me different than a lot of Djs, and there are other Djs like me that do not shy away from any genre of music. A lot of Djs stick to one genre but having that appreciation for all kinds of music that helps me in creating new and different mixes.

DJ Miles: When KJAMS was created I liked it and what they were about and I decided to jump on board and make something happen.

People can expect a lot, we are going to be playing 70s, 80s, and 90s, all the old school music. Everyone is in for a treat. We are going to give the audience the best we can and every mix is going to be unique and have a lot of flavor.

We are going to make it happen and be ready as this show blows up.